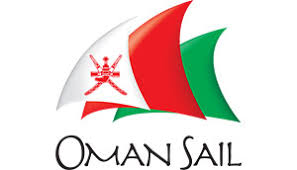 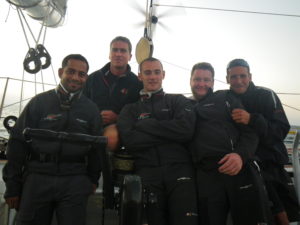 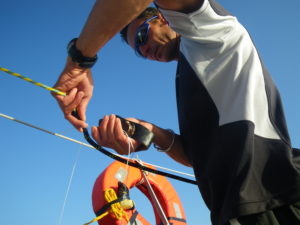 no tear jerkers today i promise – we are heading south fairly quickly, we
have had more wind overnight than we expected ( not stopping at all ) and
the wind has not shifted yet to the NE as we had expected by now – mainly
N’lys and up to 16kts 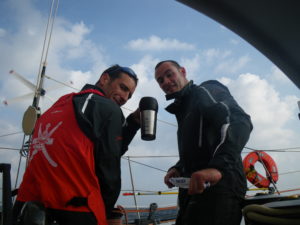 Yesterday’s food bag went pretty well with a good percentage gone – the
remainder will be our heavy weather stock pile for when we don’t want to go
and find another bag, or simply want something extra. 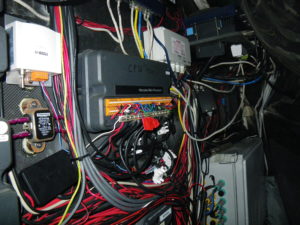 yesterday was a mixture of sailing and problem solving, one problem with the
instruments needed quite a bit of testing to find the problem, as it was
intermittent 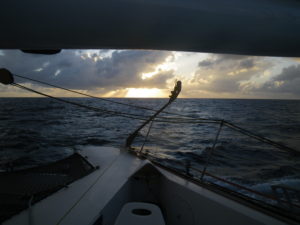 Hi Everyone,
we are reaching along at approx 90degrees to the direction of the wind –
which is fairly fast but also fairly bumpy – only 14kt of wind – but 1 reef,
and solent jib set to keep the boat speed sensible across these waves. 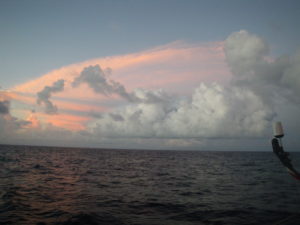 Equator-Done,
in one direction at least ! we crossed the equator at 1208 UTC today 13 jan
i think that we were all a bit tired – there was a bit of a delayed cheer
but we were all happy to reach this milestone. 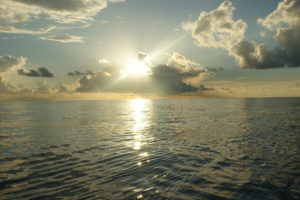 so the sea if pretty flat, and although the winds have droped significantly,
for now we continue to make progress, this is pretty much the start of the
doldrums 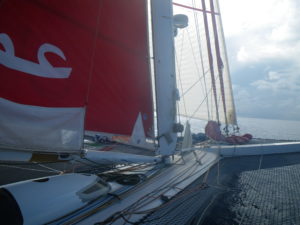 had a funny old day yesterday, we had a good run first thing where things
were looking too good to be true, followed by quite a few hard hours with
between 0 and 2 knots of wind. 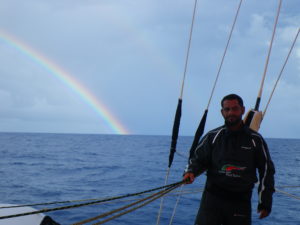 The last 24 hours have been incredible…

we have quite a bit of breeze that we shouldn’t have had, and now as I write
this we don’t have the breeze we should have