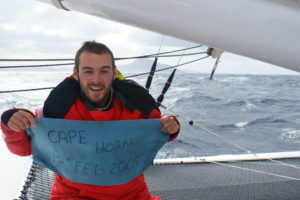 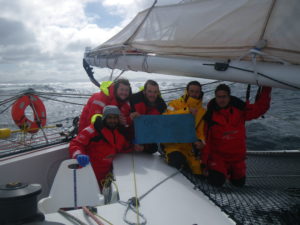 The team round The Horn


It’s hard to know where to start when describing the last 24 hours – we
managed to do quite a bit in one day. As i wrote the update yesterday, Loik and I had given the other three quite long lie-ins ( extension to their
pff-watches) on this occassion it was adding at least a couple of hours to
their sleep, which recharges their batteries and gives them a bit of a break
( danger of course is that it has the opposite effect on the crew providing
the back up for the ‘holiday’). During this time we made a phone call to a
school in Oman that was recieving a visit from OmanSail shore team to help
explain the trip. Mohsin was roused from his ‘holiday’ to entertained the
children with stories from the Ocean, helping to inspire them, and we hope
get them to come and try sailing! Of couse all of this was a very useful
diversion from the task of the day, ‘Round the Horn’. We needed it, as
without these diversions the day would prove to be very long indeed.

With the kids inspired and the watch routine re-etablished we moved ever
closer to Cape Horn, Full Main and Gennker, and a little overcast seemed
like an all to perfect way to continue around the Horn, and so it proved to
be – shortly after handing over the Theirry and Hooch, and with just
enough time to get into sleeping bags, the seastate changed dramatically. A
light following swell changed rapidly into a head sea rolling from the
Atlantic and a pacific wave period that caused nitemare slaming timing – it
was time to slow down and shorten sail. ( all Cape Horn veterans wiill be
nodding at this stage, i am sure, as it’s fairly obvious that these sea
conditions have to start some where, when two giant oceans meet, there is
bound to be some distrubance) With the changed sea conditions, came a
significant wind increase, furl the gennaker, pack it well, Genoa and full
mainsail, gave way to Genoa&1 reef, then solent, and 2 reefs, then staysail
and finally our lovely heavy weather trim 3 reefs in the mainsail and
staysail – by this time the wind is howling, gusting to 40 kts, and causing
us to surf on the local wave from the west, up and over the swell from the
east, the water colour had changed from the pacific blue to emerald green,
and finally with Loik and Mohsin on watch and 8 miles in the distance the
Horn was sighted.

Nothing really prepared me for seeing the Horn for the first time. It was
rather like seeing a regularlly appearing TV actor in the street, and
reconginzing them, but not sure where from. It was only a few hours later
that i realised what was so familiar – we were approaching on the same
course as generations of cape horners before us – and their initial
video/film of the horn was shot from the exact same angle and usually the
same distance! The picture through my view finder was exactly the same as
theirs – wind and waves included.

As we closed on the Horn the overcast sky cleared somewhat to give a partly
sunny sky, and an unreal chance to see the Horn in all it’s glory, wind
waves sunlight – how lucky could we be – it doesn’t take too much to
imagine just what a nitemare place this could be if you were a) upwind b)
vis was poor c) waves were bad d)was any colder than it was for us WE
HAVE BEEN SO SO LUCKY to be rounding in PERFECT conditions. The sea
conditons were rough for taking pictures and filming, and looking though the
viewfinder caused a few involentry staggers, and risk of a camera getting a
free swimming lesson, but in the end we have a good record of our rounding,
and something to jog ailing memories in the years to come, as well as images
to inspire a new generation of Omani Cape Horners. It took quite a while to
get all the picture we wanted, and as we slipped away to the East we looked
for a final time at the Horn, not sure if we’ll be back, but if not it was
great to be here just once. For the rest of the afternoon we sailed within
sight of the numerous islands of this archipeligo, all the while the wind
and waves dropped, and within 3 hours we were once again under full mainsail
and gennaker – with dramatic skies, unbelievable. As sun set the watch
was changed, and we held our cape horn party – music by bob marley, jelly
babies by Yoey, and cigars by Loik. It was a party to equal any other cape
horn rounding party!!!

It’s really hard to accuratly portray what it’s really like, i just can’t do
it justice in words – as much as anything sailing round the world is defined
by passing cape horn, so to have done that feels like we have sailed round
the world – although we have a rather long way to go, we are in a
considerably better place now than a week ago should we get into any
trouble. Help is not so far away, and safe harbours are not too distant. So
from that point of view some of the pressure is removed, but we are still a
long way south, the water is still very cold, and we need to get north to
clear the ice of the south atlantic – normally well to the north of south
georgia.

For those of us that have grown up in Europe where the globe in the
geography class room has been rotated to show Europe, the picture on the
computer screen has now become familiar, and that is also a comfort – the
Atlantic feels like home. I can well imagine that Aussie and Kiwi sailors
feel a pang of lonelyness as they pass cape horn – passing out of their home
ocean, their school globe having been set to show Australasia and the
pacific.

The route from here will take us NE passing to the E of the Falkland
islands, and continuing to around 42N when we can head E wards towards South
Africa, quite how far north we’ll go will be dependent on the ice and low
pressure systems to our south, and the St Helena High to our North, playing
these two off against each other. The shortest distance is well to the
south, but there is lots of ice there. The longer safer route is more than
likely the fastest route. We hope to make the longitude of Cape of Good
Hope ( our third great cape ) in around 10 days – it’s 3500nm away, after
that we can expect to be wearing slightly less clothes than we have to do
now, as our attentions turn to the Indian Ocean once more, and the
challenges of heading north……….stay tuned!

SummaryÖ Complex pattern and subject to change later this week and over the
weekend.

system pushes thru you Thursday night.

NW Thu night then SW Friday as the low pulls away to the SE.

a) Hopefully we are north of the light air from this
high.

our estimated position then.

8) Will need to monitor that system over the next few days and try to
minimize its impact.

RoutingÖ Do your best to head in general NE direction to be near or north of
ice waypoint 48s/35w by Sat and W of 43s/20w Ice waypoint by early next
week.

Some estimated positions below

WeatherÖCloudy with a squally shower possible

Seas increase to 10-15 ft during the day