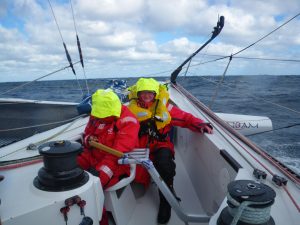 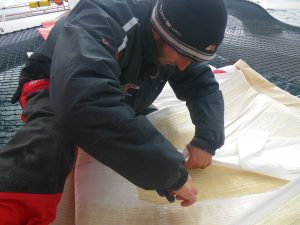 Don’t make it any worse


Morning,
i thought these updates would be easier to write when we were more in the
correct timezone for GMT, but it’s more dependent on my own sleep patten,
and the last couple of days I’ve been spending more time on deck at night as
condtions have been more challenging and 3 pairs of hands are better than
two, this throws my rhythm a bit, and seems to make it more difficult to
wake up and have 100% brain function than normal. Normally it’s a skill of
mine, to wake up and be immediately on the pace, ( both onshore and at sea).
So for now i’ve been a sleep for 2 hours, and woken to find it’s time to
charge the batteries ( run generator, by jumpstarting George as usual), get
something to eat, get something to drink, see if we are nearing the point of
a gybe to the north,go to loo and write an update……these conflicting
priorities need sorting out before i can do any of them, so far I have
managed a slurp of drink, got a shortbread biscuit to eat, decided we must
be close to the gybe, had a pee, started the generator, and am now writing
the update! All that an i’ve only been out of bed 7 mins!! ( remember that
getting out of bed means pulling on socks, boots, wet weather gear trousers,
thermal top, jacket, packing sleeping bag, all in the dark) Now you can
decide if i have been successful in doing a good update!! ( and may forgive
a poor one!)

The last 24 hours have seen some good sailing – making progress where we
want to go, and with pace, much of it with 1 reef and solent, with at times
the small staysail jib set. averaging high speeds, with Loik or Theirry
driving like maniacs at times. During a bit of on deck filming I was sat
behind Loik trying to get a helmsmans view of life when we got nailed by a
big wave… it landed all over Loik, and got me a cracker, so much force,
and so much water that it made my lifejacket inflate!!! So for the record
our Speed over the ground 24 average to no 5am was 17.97 kts ( 431nm through
the water) , our 12 hour average 16.31, and last 4 hours 14.81 as you
can see the speeds have slowed despite going to full mainsail and gennaker –
the winds and waves have dropped away as we move north closer to the center
of a high pressure that is passing to our north. Our overall plan is to
wait until our track is pretty much E, then gybe N and hook into some NW
winds on the W side of the high pressure after it’s moved E of our position.
Timing is critical, a gybe too early means heading straight into the center
of the High, and getting stuck, leaving it too late means not making enough
ground to the N to be in a good position for the storm to pass behind us
later in the week. We are working closely with Commanders Weather who are
preparing forecasts for us to ensure we make the right direction change at
the right time – sometime in the next 3 hours seems a likely bet.

Since our progress has been good we’ve been seeing where we are compared to
the 80 day pace boat (again), and at 2230 last night we passed a point
where the pace boat will be in 8 and 1/2 days time – so that’s a pretty
handy lead, and some chance the next couple of days to increase it a little
more – we need to in order to keep some to play with going into the final
1/4 of the trip up the indian ocean, which could be fast for us or slow,
we’ll not know that until we get there. However the inescabable truth of it
is that we are getting near and nearer to our goal of being back in Muscat.
Our daily food bags are packed into larger bags of 5, this morning i got
bag 46 out of big bag 46-50….and the mind starts whiring…. 50 days gone
( i know it hasn’t really but it says 50 on the outside of the bag! ) that’
5/8ths of the trip gone, but wait we are 8 days ahead, well that’s nearly 10
so 70 days total, so 5/7ths of trip gone! Now all this rounding up and
rounding down is giving a false impression, it’s the mind playing games.
(again) However we are getting there, and the closer we get the harder
failure will be to take. Before leaving Muscat I finished reading a book
by a leading TV presenter who is a die hard West Brom Fan, his book is all
about being a fan of a – shall we say ‘struggling’ football team, and
describes his feelings before a game, during and afterwards. He notes that
if they are loosing 1-0 in the first 10 mins, he quite enjoys the match,
knowing this was the outcome he’d have expected ( loosing) but if the result
was reversed in the first 10 mins then he’d spend the rest of the match in
agony waiting for the opposition to first equalise, then get one goal
ahead….. That’s a bit how this trip feels – you start of knowing that
the odds of making it round without stopping are pretty much against you –
history has told us that, and each day that passes in the early part of the
trip you are waiting for the thing to occour that might scupper your
chances – things like the early generator problems….. and in truth you
start to want them to be the reason to stop, just so you don’t have anything
more serious to deal with! but then you solve these problems one at a
time, and slowly slowly we keep going , and keep going passing the
milestones, ( and our chances of convenient stops ) and gradually the
belief grows – we can do this, we can make it, but just like the football
fan – we’ve gotta wait it out to the final whistle before knowing if we have
made… because we have seen in this winter’s Vendee Globe race it’s really
not finished until you cross the line, and for us that is still quite some
time away sure it’s getting closer, now just 6900nm but not getting to the
finish will be twice as gutting now as it would have been 7000nm ago. So we
are being extra careful in everything we do… just to make sure we don’t
make a mistake of our own in this final few weeks to the finish.

a) consequently, will go with the wind staying a little more right

a) this low will intensify some more and head ESE

a) will likely be squally along/ahead of the front

10) Wind shifts to the WSW and SW behind the front

11) GFS takes low down to around 46s, but think it may be a little further N
(ie, closer to 45s), so we still want to watch it and make sure it passes to
the S

14) With the SW and WSW flow, we will likely keep to the south thru 20e
then start heading more NE as the flow backs over the weekend

4) some estimated positions below

Weather…Variable clouds with a few showers, mainly 1st part of the day.