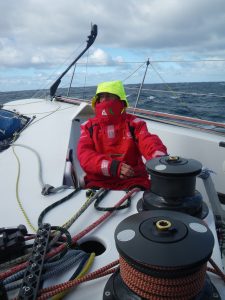 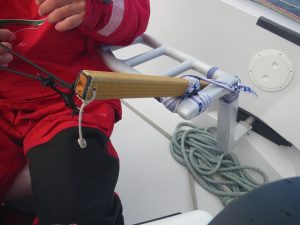 
We’ll we are back on track, after last night’s tricky conditins we are a
little bit back on track – we have a reef and solent jib amd heading north
of E, in an 18kt S wind. We are covering ground at a good pace, and that’ s
good because we are racing a weather system again. We need to get N and E
by Tuesday to avoid a storm that is currently brewing off Uruguay, currently
centered over the old Whitbread Round the World Race port of Punta del Este,
E of Montevideo. That storm heads very quickly SE gathering in size ( it’s
currently 380nm across but will build to be 1500nm across by middle of next
week) so getting ahead of it and away from it is our priority. Currently we
are scheduled to be more than 24hours ahead of it’s center, but the further
the better if we can – it’ll mean we avoid the worst of it’s 50-60kt winds.
However it’s fairly likely we’ll see significant winds on the edges of it,
even if we manage to put a good distance between us. I seems like Wednesday
and Thursday will be yellow suit days!

So that’s how our sunday morning starts – racing E across the S.Atlantic, in
very chilly weather – it’s less than 10 degrees on deck, and the occassional
spray from the bow wave keeps our wet weather gear wet, and adds to the wind
chill factor. Hats and Gloves are the go, and if you are Hooch, you’ll be
“white, blue,grey , dark grey, reds.” Mohsin is in his sleepig bag off watch
at the moment, and in an hours time he’ll be making that difficult
transition between sleep and conciousness, between warm sleeping bag, and
damp wet weather gear, carefully iterweaving top and bottoms to ensure no
gaps, before arriving on deck and needing a pee, and having to undo all the
carefull preparation. On days like this at homea brisk walk to the paper
shop to get the sunday papers and back is all you need to persuade you that
a morning with the papers and mugs of tea is what you really want to do
rather than tackle the garden, or any other outside jobs you should really
be doing. That’s not an option here – there are sails to trim, and
lookouts to keep – the routine continues, day in day out. Part of that
routine meant opening day 45’s food bag, some chocolate bars, and extra
bags of wine gumms will help make the low tempretures more bareable, as will
a new jar of coffee, and an extra round of snack bars. The main meal is
goulash, which is a favourite too.

To run the generator we need to fill up it’s fuel tank – this day tank is
designed so we can easily monitor how much fuel we are using, and every few
days we need to fill it up. Today was a top up day so I switched the valve
between the main fuel tank and the day tank, and clicked on the fuel pump as
usual. It’s not a fast pump, it’s not a really slow pump either, so it
does give you a chance to do other jobs whilst you do the transfer. So I
was changing some settings to our compass heading, when something else came
up, and for just long enough to distract me from the running fuel pump, a
min later I opened the door to the generator room to smell diesel. Switching
off the fuel pump rather quickly, ( and rather too late), I found i had
overfilled the day tank, and spilled a bit of diesel out of the breather
pipe….. Luckily I was only doing 3 things at once for a short period of
time, and didn’t spill too much, and it hadn’t spread too far, but it did
mean the next 30 mins was spent on environmental disaster avoidance –
it’s easily done, and in some ways I am a bit surprised it was the first
time, i do hope it’s the last.

We are coming E quickly, and that means we are crossing time zones quickly
too. This is great as it means the times are coming more normal again, so
rather than the sun rise at 10pm and setting at 10 am as was the case a few
weeks ago, we have sun rise at 7:30am and setting at 9:10pm This helps us
to keep track of the day more easily, and it’s quite exciting to add another
goal to our trip – the crossing of the Greenwhich Meridian – where we cross
between the Western hemisphere, and the Eastern Hemisphere, and will be due
south of Greenwhich, London. That’ll be over 5500nm to our North. In fact as
we cross we will be crossing some where as much south of the equator as
Bordeaux is to the North – another useless fact which is produced when you
are sat with an electronic chart, a mug of hot chocolate, and are looking
for an excuse to spend just another few mins at the chart table rather than
fighting into soggy wet weather gear to put in an appearence on deck!!!!

a) this causes the low to take a more northerly track, instead of diving
to the SE ñ not certain this is correct, but

c) this will require us to get N of 42S, but this is a bit tricky, as we
don’t want to sail into the middle of the approaching high pressure and get
stuck and then wait for the low to approach

4) SW winds may back a little bit more in the very short term, but

b) right now I have you going over to port just before 1200UTC Mon. I
think 1200UTC Mon is as late as you want to wait to gybe ñ the high pressure
will be moving away and we DO NEED to get northing before the gale, so

c) if our heading is any further right than 095, then we need to gybe to
port and start getting some northing

5) Much lighter W and NW winds Mon into Tue, as we sail NE and ENE into the
western side of the

b) we will need to balance getting too far to the N/too soon and sail
into lighter and lighter winds versus being too far S, once the NE winds
develop Tue night

b) there will be another low near 35S/18W, but this low will not move SSE
until the high pressure moves E on Tue

c) the worst thing that can happen to us is get into easterly gales by
being on the S side/wrong side of the low, so

may change back to yesterday’s forecast, but

a) looks like NE winds arrive Tue night/Wed, so no more northing at that
time and we may use some of the northing

b) may be very important to not get pushed S of 42-43S again, since the
low may track very close to that latitude and we do NOT want to be S of the
low

8) Looks like we go into NW and W winds on Thu, as the low passes by to the
S

a) aimed for the SW corner of the Aghulas current loop near 40S/20 30E.
It then extends NE to 38S/30W ñ this is very favorable current with speeds
up to 2-3 kts heading towards the ENE

b) I would not go N of this loop current, as there is unfavorable current
with speeds up to 3-5 kts and the high pressure cells tend to track along
and S of 40S, which means there are headwinds further to the N

c) in fact, we may end up aiming for 40S/20 30E, but in reality, the wind
shift into the SW and SSW on Fri may keep us S this waypoint and there is a
chance of NE winds along the northern route late next weekend

1) Starboard with the SW winds, but

2) Will gybe to port by 1200UTC Mon or earlier, if your heading becomes
south of east

a) NE winds develop Tue night, so no more northing at that time

4) Must watch the gale on Wed/Thu very closely

a) could still see this low become a monster and

b) must watch its’ track closely ñ we do NOT want to route S of this
gale!