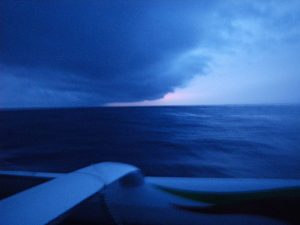 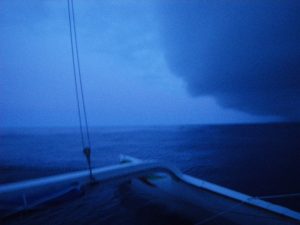 these clouds can carry lots of wind with them

From: OmanTri
Date: Thu, 5 Mar 2009 02:53:06 -0000
To: update
Subject: BIG SHIFT
Day 56
So the wind has started to shift – in one 15 min period the wind shifted 130
degrees – we have gybed and are heading 070 degrees on stbd in a SSW wind.
One big cloud was all it took to signify the shift’s arrival, and 15mins
later we were heading off in a similar direction on the other gybe. The
major news though is an end ( for now) of the last 3 days of wincing at
every wave that smashed into the boat. The noise and the impacts were just
unbelievable, at times during the day yesterday we weren’t even able to use
the phrase that we have used all this trip “well, it could be worse” it’s
hard to see how it could have been any worse – if you recorded the motion
and the noise you wouldn’t be allowed to run it as a fairground ride, and
you wouldn’t be allowed to use as much water as would be required to
reproduce the waves washing the boat. It was by far the roughest and most
dangerous for the boat of the trip – a cumulation of 3 different swell
directions, and sea driven waves – unreal. In the front in the bunk next
to the generator sleep was impossible until a break in the sea and wind.
Now on this new gybe the sea is still a bit of a mess, but it should slowly
straighten up, and certainly there are much fewer of the massive impacts
that worry so much.

All through the day yesterday we were being thrown around down below and
pumelled by the waves on deck, it’s going to be such a pleasure to get N
into warmer climates, where we can complain about the tempreture, and how
dry it is. Getting dry again will be the greatest pleasure though, and not
having to put on so many layers, and not have to worry that the waterproofs
are not waterproof!

Our routing from here takes us NE until noon on friday afterwhich we should
be well into some E winds to take us due north – heading for a point around
450nm E or Runion Island, after wihich we have a battle to fight with the
doldrums, up to the equator, and then lightish upwind conditions to
muscat – sounds easy, but the last two weeks are going to be a challenge – i
just hope the waves behave.

To: Charles Darbyshire and the crew of
ìMusandamî

1) Cold front looks to have passed you. Your winds will back and slowly head
you

a) the low will pass to the SW and W of the high, but

b) satellite imagery suggests the low could be further E than I expect
and this is where the problem comes in ñ the low could force the ESE and E
trade winds to back into the NE, which would not be nice

4) If your boat speed is similar to my estimate, then my route is as far W
as you can go

a) if you are faster, then you can go my route with a higher degree of
safety, but if slower, the low will be closer and we need to go more ENE/E
of my route over the next 12-24 hrs

a) think we may see easterlies, probably light wind speeds, later tonight
ñ try to keep getting a little easting with the easterlies, so more
reaching/slightly upwind. Do not want to get into the strong NE winds near
the low

b) winds may not increase until Sat night/N of 32S ñ better to be along
or E of my suggested route. West of my route may not be good at all!

b) winds will become W and NW north of the doldrums ñ we may end up
aiming at the Maldives, but

c) winds will back from the NW, into the N and NE, so a right shift. We
will need to be on the right side of the race course before this right
shift, so aiming at the Maldives will be fine and when the winds back into
the NE, we tack to starboard for Oman

a) then N as best you can and not get pulled W of 57E again, even if
headed

3) Once the low has passed or we are N of the low, we want to get over to or
a little east of 60E

a) we can sail fast N, but if winds back a little bit, we need to reach
60E or a little bit E of it

Weather…Mostly cloudy with a scattering of squally showers possible. Some
NW swell, but mainly SE swell of 4-7 feet

WeatherÖCloudy to partly cloudy with the showers ending. NW swell ends and
seas mainly SE-E 4-7 feet, once the low passes, but before then it may be
quite rough

WeatherÖPartly cloudy, maybe a shower near 12S. Seas ESE and SE at 4-7 feet

WeatherÖPartly cloudy, any shower threat ending with a wind shift into the W
and NW. N and NW swell increasing to 4-7 feet